Since the release of John Lewis’ 2016 Christmas advert featuring Buster the Boxer, searches and sales of trampolines have skyrocketed.

According to online retail specialist Summit, online searches for trampolines have doubled week on week since the adverts release on November 10, shooting up 300 per cent that evening. Searches for Boxer dogs have followed a similar trend, doubling every week.

The advert which has been watched over 17 million times on social media and a spokeswoman from John Lewis told Express.co.uk that sales of all products related to the advert had seen a sharp rise in sales.

The retailer has not disclosed how much was spent on the advert, saying only that it was close to previous years which totaled around £7 million, including production and television slots.

“The John Lewis advert has become a signal of the start of the festive season, and the volume of searches we have seen reflect that big audience,” Summit’s head of insight consulting Martin Corcoran said.

“Clearly the demand for trampolines see an impact, as indicated by the surge in searches, and we strongly expect to see sales of trampolines increase as a result.

“However, retailers won’t see an increase in sales immediately, mainly because it is quite challenging to hide an eight foot eight trampoline in the cupboard under the stairs. It is likely that we will see purchases of trampolines jump on Black Friday (28th November), and later on in December.” 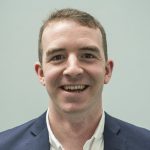