The Summit Polo Cup 2012 and the Ancient Greek Olympic Games 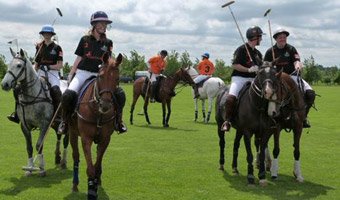 Some of the region’s finest polo players were in East Yorkshire last weekend as The White Rose Polo club hosted the annual Summit Cup.

Although the day started with some light rain it wasn’t going to ruin such a spectacular event, filled with amazing local food, champagne and a fancy dress themed party on the evening. Guests arrived to a glass of bubbly and canapés with a rundown of the day’s event including a beautiful luncheon and afternoon tea while watching the polo.

The first Polo match was the Pro-Am competition between two teams who made their polo tournament debut following an intensive six week “Zero to Hero” polo course at White Rose. This was followed by 4 teams competing to make it into Sunday’s Summit Cup Final 2012.

The first match was Summit vs. JCS Salmon, and the second Omnia Three Oceans vs. Bridge McFarland with Summit and Omnia Three Oceans making it through to the final on Sunday. After such thrilling and exciting final, Summit won back the cup beating their opponents 7-6 with a golden goal in extra time.

In the evening, there was a fancy dress theatrical treat and all guests returned to be hosted by the Gods of Summit’s Ancient Greek Olympic Games. The evening started with guest participating in a range of different Olympic events such as chariot racing, wrestling, olive spitting and space hopper racing.  Once the games where over, we all sat down to a Bacchanalian Greek feast, full of different taste and flavours with guests tucking in to moussaka, homous and bread.

All guests then danced the night away and some were even brave enough to try bandaoke. The Summit Cup 2012 is definitely going to be one to remember and Summit would like to thank everyone for making this year’s Cup such a spectacular event.